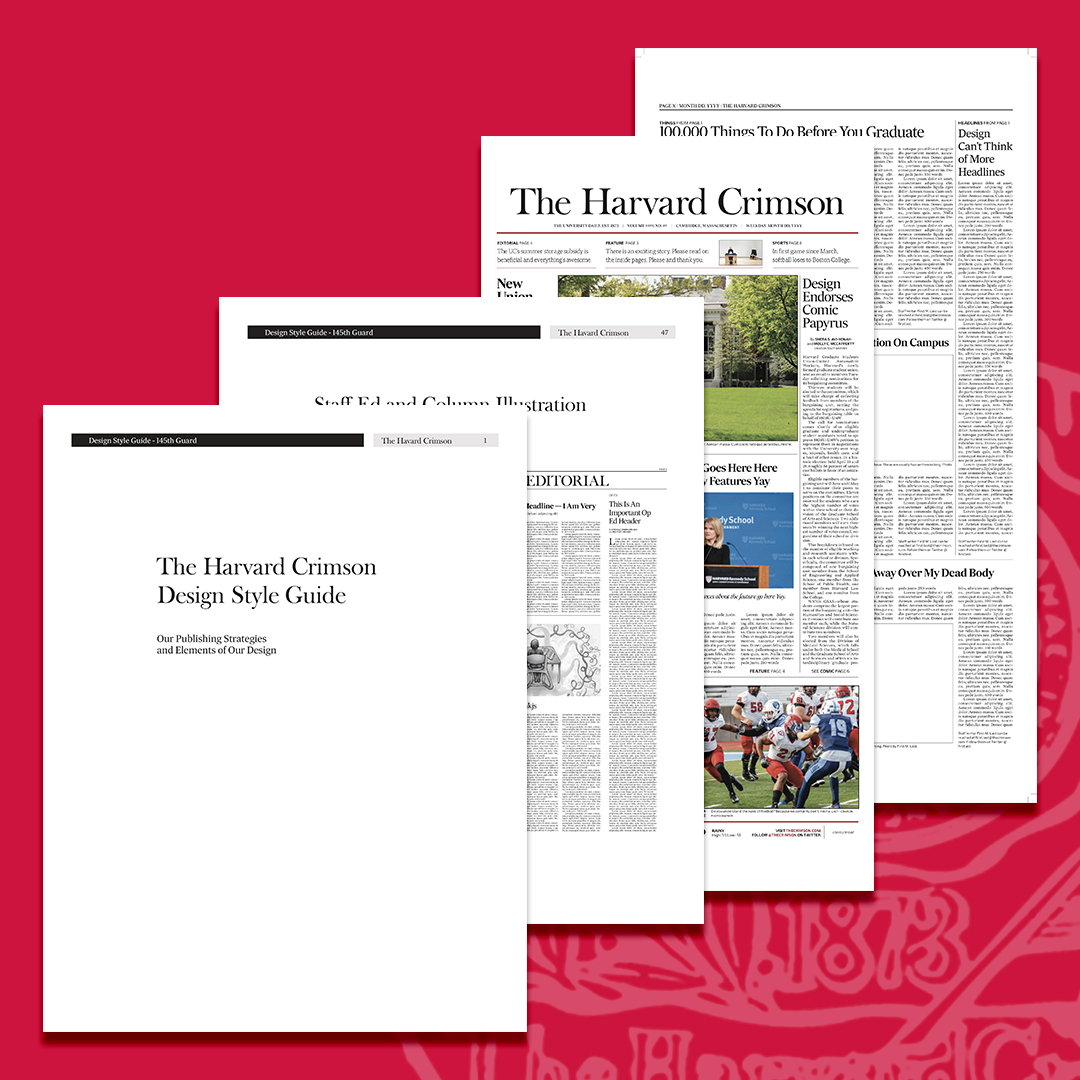 When I first joined the Crimson’s design board in 2015 as a freshman associate designer, designing for the daily paper was a test of faith: there was no written style guide, rules and guidelines were passed down by word-of-mouth and quick trial-by-fire demonstrations to new designers, and quick turnarounds meant there was little room for creativity or innovation. The board leadership had just redesigned the daily layout earlier that year, and as such the previous style guide-- written in 2004, when the paper just began being printed in full color-- was discarded, but no replacement was procured. The lack of that consistent design language was a hot topic for the 3 years I spent in the organization, among many other imperfections brought about by that redesign.
‍
When I was elected Design Chair in 2018, I had run for the position on the basis of finally producing that style guide. However, after discussing the state of design with other executives, we opted to go for a full redesign in addition to publishing the style guide, an effort that was conducted largely remotely over the summer between myself, my co-chair, the President, the Managing Editor, and a small team of four other designers.

Prior to making any design decisions, we conducted some surface-level qualitative research. This consisted of one-on-one interviews with the Chairs of each content board (news, arts, sports, multimedia, editorial) to determine their issues with the current daily design, as well as content analysis of each specific page of the daily paper and a historical review of the 2004 style guide. We also drew from our existing experiences as designers working on the daily layout.

We synthesized our findings into 3 main goals

Each designer took charge of a specific area of the redesign after group discussion, with the Chairs and President overseeing the whole. I took charge of redesigning the front page.
View Style Guide

While I am proud of my work on this project, having the knowledge of the design process that I now have would have benefited tremendously. For instance, we were unable to conduct much deeper research due to the accelerated timeline at the end of the school year, as well as my limited understanding of design research at the time. In retrospect, I would have done deeper interviews with the boards, conducted some research with the design board as a whole rather than relying on my own experience, and looked into some focus groups with readers (a survey, perhaps), in service of asking additional research questions about readers’ experiences. Another place for improvement would be the user testing phase. We did a soft launch of the redesign during the week before the semester started, making tweaks along the way, but this was the first use of the layout, and it would have benefitted from internal testing beforehand, for instance by bringing in designers not involved in the project.